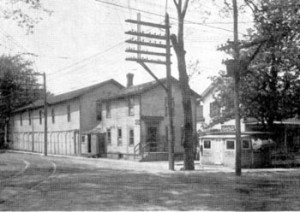 The trolley depot was at the corner of Main and Park Ave. It was torn down to build the post office. The trolley stopped at all the crossroads. The horse shed for the Universalist Church used to be back behind there too.

There were horse sheds behind all the churches. People used them on Sunday and also when they took the trolley to Lockport and other places.