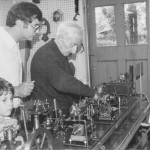 In the early 70’s when my husband and I first moved to State Street, we met Margaret and Elmer Vary, our neighbors at 55 State Street.  Little did we know what a treasure of a man Elmer had been to this community for nearly 90 years. His early years were spent from the age of

On the corner of Orchard and Church Street was a broom factory. They operated there for some time, then moved out. Another inventor,Dr. E.L. Downey. Downey took over the broom factory and put up a fluid spray called “Downyside”. In one of his 1904 ads he states his insecticide did not smell like rotten eggs as

Do you know who this is? He was an important figure in Middleport’s past and he has a road named after him. There is an historic marker on this road that shares some history about this man and his role in Middleport. Any guesses?

Before the dawn of the electric refrigerator, the ice box kept things cold. Needless to say, there was a need to harvest and store ice. Iceboxes date back to the days of ice harvesting, which had hit an industrial high that ran from the mid-19th century to the 1930s, just before the refrigerator was introduced

The community of Middleport has been home to many different businesses throughout the years.  Gin mills were very common and old maps show we had plenty of them to keep residents and canal workers well supplied.  We also had several nice hotels which gave travelers a place to rest when passing through. There were plenty

By Anna Wallace, former Village Historian The first reference to the Middleport Band was in 1840 at a Presidential Rally in the Town of Royalton and a Temperance Rally in Lockport. We don’t read of much activity again for about 20 years when the Middleport Cornet Band was organized with 16 members. Over the years,